Ossett - the history of a Yorkshire town 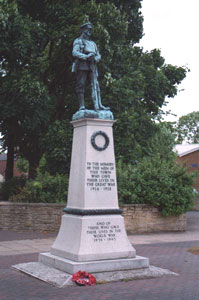 I would like to acknowledge the following sources of local information, which I have used extensively as a source of reference and without which this web site would not have been possible.

"Glimpses of Ossett's History" by John Pollard
This 50-page softback book was printed privately in 1983 under the auspices of the Ossett Historical Society and contains much carefully researched information about Ossett, which I have partially reproduced on this web site. Most chapters have been amended with significant additional material from other sources.

"Borough of Ossett - Official Guide: 1890-1974" printed in 1974 when Ossett lost its Borough status and became part of Wakefield Metropolitan District.

"The Town and Trade of Ossett" a handbook published in 1927 by Ossett Borough Council.

"Better by Far" by Alan Allsop J.P. privately published in 1979 by Miniprint, Dewsbury.

"History of Ossett (especially after 1800)" by Colin Oldroyd, privately published in 1951.

"The Ossett Observer" held on microfiche archive at Ossett Library, Station Road is a fantastic resource for Ossett history and I have spent many hours reading through past copies of the Observer finding much previously unknown local and family history. A welcome recent innovation is the facility to print A3 or A4 copies from the microfiche machine, but be prepared to pay 80p per A3 copy and 40p per A4 copy. I understand a similar archive is held at Balne Lane library in Wakefield.

"Around Old Ossett" by Richard Bell published by Willow Island Editions, Middlestown, Wakefield. ISBN 1-902467-01-9 - this is a splendid little publication with some excellent sketches by the author. See Richard's web site http://www.willowisland.co.uk/ for more details and also his "Wild West Yorkshire" online nature diary, which is good reading.

"Look Back at Ossett" by Norman Ellis, ISBN: 978-09546439-2-8 - with some more picture postcard reproductions of Ossett and some rare pictures from private collections. First published in 2007 by Rickaro Books, Horbury.

"Wakefield - Its History and People" by J.W. Walker published first in 1934, this rare book was made available on CD by Colin Hinson at his CD Books website for £12 post paid. There is not a great deal of content specifically about Ossett, but the Manor of Wakefield, which Ossett was part, is very well covered. There are many other useful CD books on Colin's site and it is well worth a look.

"Mark Senior 1862 - 1927: Exhibition Catalogue and Biography" by Gillian Spencer, published for for an exhibition organised by Wakefield Art Gallery & Museum 16th April - 2nd July1983 and believed to be the only published work wholly devoted to the Ossett artist.

"The Illustrated History of Leeds" by Steven Burt and Kevin Grady published by Breedon Books 2002 with some useful details of Bean Ing Mills in Leeds and Leeds in Victorian times. ISBN 1-85983-316 -0.

The Museum Library at the National Coal Mining Museum, Caphouse Colliery, New Road, Overton, WF4 4RH for much of the information concerning coal mining in Ossett and Gawthorpe.

"Princes under the Volcano" by Raleigh Trevelyn, first published in 1972 by the Phoenix Press and re-printed in 2002 in paperback. To quote from the back cover of the book: "Benjamin Ingham, possibly the greatest tycoon England has ever known, was attracted to Sicily from his humble beginnings in Yorkshire by the burgeoning trade in marsala wine. This is the story of the English Croesus, who made the money, and his beneficiaries, the Whitaker family, who spent it - intertwined with two hundred years of Sicilian history." Benjamin Ingham came from Ossett and members of the Whitakers also lived in the town. ISBN: 1-84212-435-8.

"Benjamin Ingham e L'America (1837-1840) " by Federico Rigamonti, a PDF document written in Italian and an account of the business activities of Ben Ingham Jr., on behalf of his uncle Benjamin Ingham of Palermo in America between 1837 and 1840.

"Ingham of Ossett" by E. Stables, a family tree dated 1912 showing the descent of the Inghams of Blake Hall, Thornhill from William Ingham of Ossett circa 1670.

"Richards Families in Wexford and other family records" by Christopher Richards, Web page with detailed family history of the Inghams, Whitakers and associated families, including Wills and other details.

"Concise History of the Parish and Vicarage of Halifax" by John Crabtree, first published 1836.

"Notes referring to Terry, Greaves and Co. at Roundwood Colliery and other Ossett collieries" by John Goodchild - document provided by Michael Greaves, March 2009.

This web site is very much work in progress and there is still a great deal to add as time permits. I was born and brought up in Ossett and lived there the first twenty-one years of my life and the town will always have a special place in my heart.

The preface to "Glimpses of Ossett's History" by John Pollard has the following information:

"In writing Glimpses of Ossett's History, I have tried to include the principal events, which have occurred here and also give some account of the ways of life of ordinary people. Conventional history is referred to only to the extent required to provide the setting or the explanation for Ossett's affairs, but some reference to the affairs of our neighbours has been unavoidable.

Much space is given to our early centuries, but this is not a comprehensive history. There are many gaps in the story and Glimpses of Ossett's History is a fitting title.

I have drawn on many sources of information, including a series of lectures given some years ago by Mr. Colin Oldroyd, which I remember with pleasure. Other sources have been the Journal of the Yorkshire Archeological Society and the pages of the Ossett Observer, which latter for over one hundred years gave a wide and faithful coverage of local news. Information about mining has come from Mr. R.W.G. Lucas, ARICS, and Mr. Clifford Ellis has allowed me access to his documents.

I also offer thanks to Mr. Albert Spencer, Mr. David Scriven and Mr Claud Ford of the Ossett Historical Society, who have arranged publication and who have contributed their special skills.

To all who have assisted in whatever way, I offer my sincere thanks."