Gordon Land was born in early 1897 in Thornhill Lees, the eldest child and only son of two children born to William Henry Land and his second wife, Elizabeth Ann (nee Rowley) who married in Spring 1896.

In 1901 Gordon, aged 4, was living with his parents at Lees Hall Road, Thornhill Lees, Dewsbury where Gordon was born. His father, William Henry, was working as a mechanic and he had four children, three daughters and a son, from an earlier relationship. His first wife, Margaret (nee Clarkson) died, aged 31 years in Summer 1890, leaving him a widower with four children under the age of nine years.

In 1911 William Henry and his second wife Elizabeth were living at Middlestown where William Henry was working as an iron turner and fitter at a colliery, most probably Caphouse. By this time, Gordon, a grocer’s assistant at the local Co-operative store was aged 14 and brother to 11 month-old Mary Doreen Land, who was born in Middlestown.

Gordon was 17 years of age when Great Britain declared war on Germany on the 4th August 1914. His army service record has not survived, but it is known that he enlisted at Dewsbury, joined the King’s Own Yorkshire Light Infantry Regiment and became Private 200565. Gordon voluntarily enlisted, probably shortly after his 18th birthday in early 1915 and whilst serving with the 1/4 Battalion, KOYLI, he was killed in action at the Battle of the Somme, near Thiepval, on the 6th July 1916, just five days after the first day of the Battle of The Somme. He was only 19 years of age.

The 1st/4th Battalion of KOYLI was formed in August 1914 at Wakefield and was part of the 3rd West Riding Brigade, West Riding Division. They moved on mobilisation to Doncaster and then in November 1914 to Gainsborough. The battalion moved again to York in February 1915 for training and on the 12th April 1915, they landed at Boulogne. On the 15th May 1915 the formation became 148th Brigade, 49th (West Riding) Division.

"W&Z Companies employed carrying bombs and ammunition to “A” line. Later received orders to take over “A” line from 5th KOYLI, Major Moorhouse, DSO, being put in command of the Sector.

7.15p.m. 2 parties of Bombers under 2/Lt E.E. Greenough and 2/Lt D.C. Moodie respectively volunteered to advance up the trenches leading to the German line at A.19 and B.19 respectively from A.17 with a view to extending our line and pushing back the hostile bombers. These parties advanced and succeeded in establishing blocks 70 yards in advance of positions previously held by us.

The Regimental War Diary, written at the time of these events, does not record any casualties on the 6th July 1916 but Private Gordon Land may have been one of those volunteer parties who set out at 7.15 p.m. towards the German trenches. He was probably killed in that action with his death included in the following day’s War Diary which follows.

"At midnight on the 6th/7th July 1916, the 1st/4th Battalion, KOYLI were in the Thiepval sector during the Battle of the Somme, taking part in an attack on the village of 'Ovillers' (North of Thiepval on the Albert-Bapaume Road)."

Their "War Diary" for the 7th July 1916 records the following:

"02:50 a.m. - Enemy bombers advanced down the trench towards A.18 and A.16 and across the open to A.17, a furious fight with bombs ensued lasting until 06:30 a.m. Numerous casualties were incurred both from bombs, and enemy snipers who were lying out in the open and who shot down our men as they fired and threw bombs out of the trench. Major H. Moorhouse, D.S.O. in command of the sector was wounded in the arm by a sniper about 04:00 a.m., but remained in command until 05:30 a.m. when forced through loss of blood to go to the Dressing Station, Captain W. M. Williamson, commanding 'Z' Company, and 2/Lts. Carter, Massie, Mackay, De Jonquet and Huntington were also wounded. Capt. H.G. Fraser took command and continued the fight until 06:30 a.m. when he ran out of bombs and was forced to retire down the communications trench to the original British Front Line which he held along with the 4th and 5th Y. & L. Regiment already there with the 35 men remaining out of the two companies until 09:30 a.m. when he was ordered to return to the Assembly Trenches in Thiepval Wood."

Gordon Land was a volunteer soldier, enlisting in 1915 before conscription was introduced in early 1916, and unless he lied about his age he would not have embarked for France before his 19th birthday in early 1916. He was posthumously awarded the British and Victory medals but not the 1914/15 Star indicating that he did not embark for France until after 31st December 1915. 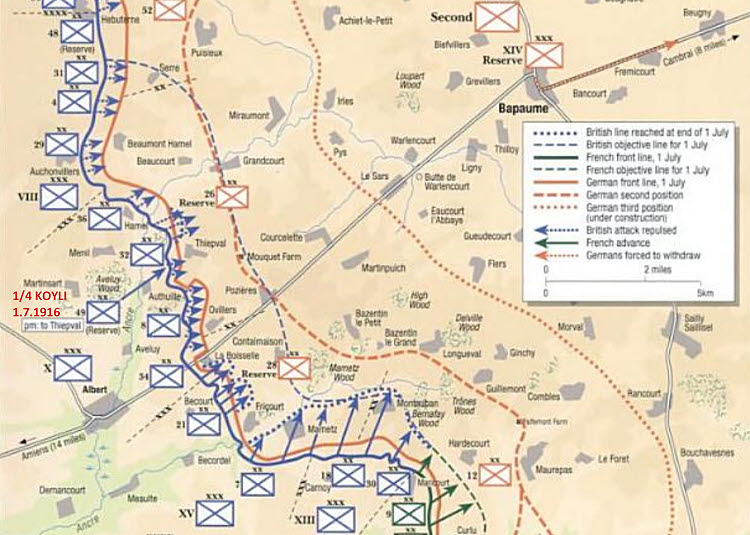 Above: Position of 1st/4th Battalion, KOYLI as part of 49th (West Riding) Division on the opening day of the Battle of the Somme, 1st July 1916, five days before Private Gordon Land moved to the front line and his death on the 6th July 1916.

Private Gordon Land, aged 19 years, son of William Henry and Elizabeth Ann Land, of 25, Vulcan Rd., Dewsbury, Yorkshire was killed in action on the 6th July 1916 and is remembered on Pier and Face 11C. and 12A. at the Thiepval Memorial,1 Somme, France. The Thiepval Memorial can be found on the D73, next to the village of Thiepval, off the main Bapaume to Albert road (D929).

On 1 July 1916, supported by a French attack to the south, thirteen divisions of Commonwealth forces launched an offensive on a line from north of Gommecourt to Maricourt. Despite a preliminary bombardment lasting seven days, the German defences were barely touched and the attack met unexpectedly fierce resistance. Losses were catastrophic and with only minimal advances on the southern flank, the initial attack was a failure. In the following weeks, huge resources of manpower and equipment were deployed in an attempt to exploit the modest successes of the first day. However, the German Army resisted tenaciously and repeated attacks and counter attacks meant a major battle for every village, copse and farmhouse gained. At the end of September, Thiepval was finally captured. The village had been an original objective of 1 July. Attacks north and east continued throughout October and into November in increasingly difficult weather conditions. The Battle of the Somme finally ended on 18 November with the onset of winter.

In the spring of 1917, the German forces fell back to their newly prepared defences, the Hindenburg Line, and there were no further significant engagements in the Somme sector until the Germans mounted their major offensive in March 1918.

The Thiepval Memorial, the Memorial to the Missing of the Somme, bears the names of more than 72,000 officers and men of the United Kingdom and South African forces who died in the Somme sector before 20 March 1918 and have no known grave. Over 90% of those commemorated died between July and November 1916. The memorial also serves as an Anglo-French Battle Memorial in recognition of the joint nature of the 1916 offensive and a small cemetery containing equal numbers of Commonwealth and French graves lies at the foot of the memorial.