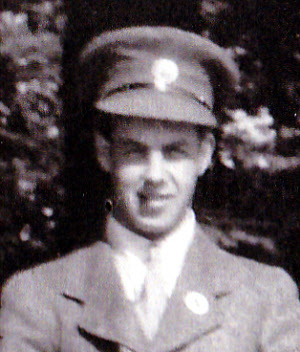 Starting around 1900, Walter Ellis was in partnership with John Henry Glover trading as 'Glover and Ellis', mungo manufacturers, at Gedham Mill, Ossett.

Edgar W. Ellis was educated at Ackworth School, a Quaker establishment and from an early age he was schooled in Quaker traditions. Quakers (or Friends, as they refer to themselves) believe that there is something of God in everybody and that each human being is of unique worth. This is why Quakers value all people equally, and oppose anything that may harm or threaten them. Not surprisingly, many Quakers became conscientious objectors in WW1 and Edgar Whitaker Ellis was no exception.

The Friends' Ambulance Unit was a volunteer ambulance service, founded by British Quakers, and mostly staffed by conscientious objectors. It operated from 1914 to 1919. The Unit was founded as the 'Anglo-Belgian Ambulance Unit' at the start of WWW1 in 1914 and was later renamed. Members were trained at Jordans, a hamlet in Buckinghamshire, that was, and still is, a centre for Quakerism. Altogether it sent over a thousand men to France and Belgium where they worked on ambulance convoys and ambulance trains with the French and British armies. They wore Army uniform, but only to distinguish them from the enemy.

The FAU, although initiated and largely run by Quakers was not formally set up by the Religious Society of Friends, it was an initiative by a group of Quakers and the Friends as a body accepted its existence, but that was as far as its official status went.

Membership was never exclusive to Quakers, but membership did involve an acceptance of Quaker values, including religious values. Perhaps the best-known non-Quaker member was Kingsley Martin, later long-time editor of the New Statesman. 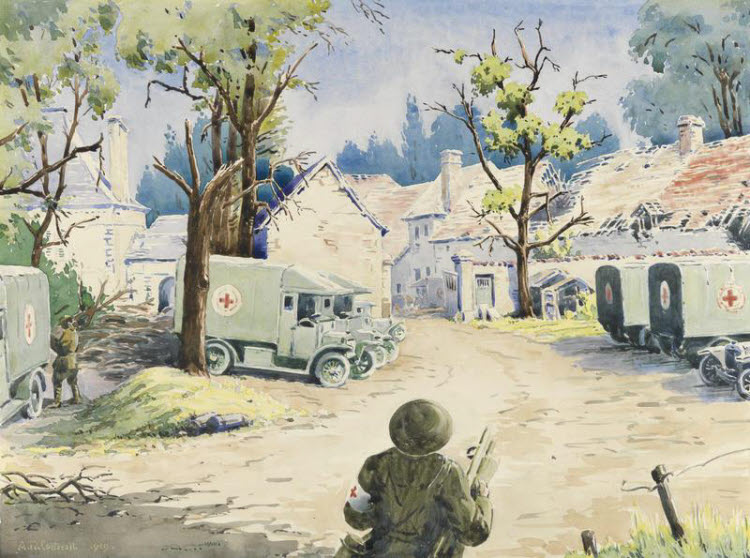 Above: Muizon on the Vesle, Reims, October, 1918: Cars of Edgar W. Ellis's Section Sanitaire Anglaise 13. The village beyond is bomb damaged, with some of the roofs of buildings partially destroyed. The village is surrounded by trees, some of which have also been scarred by artillery fire.

Its premise was that in the crisis of 1914 the founding members felt as Quakers they should do something constructive, and quite distinct from the queues of men at the army recruiting offices. It was felt that relieving the injured and sick behind the battle lines might be the most useful thing to do, after some basic paramedical/nursing training. Approaches were made to the War Office, without any warmth of response, and eventually it was the French authorities who showed some interest, and that was why the FAU, comprised entirely of civilians, ended up mostly running military hospital trains for the French. From time to time the FAU found itself caught in the aftermath of a battle and providing care and treatment for injured and/or refugee civilians.

Until early 1916 all this operated entirely voluntarily without any question of liability for military service. With the introduction of conscription from March 1916, the status of the FAU volunteers compared to military service needed to be defined. Negotiations resulted in the great bulk of the volunteers being recognised as conscientious objectors and exempted, on condition of continuing in the FAU. A minority of the FAU felt that by continuing they were actually enabling more men to be sent to the front line, and resigned. Some of these men ended up in the Non Combatant Corps (where they supplemented Labour units) whilst others who refused to anything towards the war effort went to jail.

Members of the FAU wore the same uniform as male British Red Cross staff, i.e. basic battle dress tunic, but without webbing belt, trousers and boots, etc. They were an almost exclusively an all-male unit and that may have contributed to their quasi-military status. Elements of the British army often saw the FAU as 'conchies', while at least some FAU members saw the army as being the bigger problem.

FAU members drove ambulances and helped in dressing stations. They worked in co-operation with military personnel, but largely with the French Army who regarded them as eccentric but useful. However they were not stretcher bearers in the sense of collecting and moving the wounded from the battlefield and would not be used as such since they were still civilians and not under military discipline and were not employed where they might come into contact with the enemy (indeed it might have been illegal to use them in this situation).

The Friends' Ambulance Unit provided a large proportion of the staff at the Queen Alexandra Hospital, Malo-les-Bains, Dunkirk. It was a small hospital of 200 beds and they didn't take in wounded, but local sick of all nationalities and any accident cases in the local area. The hospital was subject to much enemy bombing during the war, particularly in September 1917 and again during the German Spring Offensive of March/April 1918, when it was evacuated.

Above: WW1 Friends' Ambulance Unit vehicle after being hit by a shell.

On the 1st June 1920, after only being demobbed four months previously, Edgar Whitaker Ellis, true to his Quaker tradition, volunteered after an appeal by The League of Nations in Ossett Town Hall, to help The Society of Friends War Victims Relief Association. The local representative was Winifred Ellis, Edgar's younger sister.

He joined a team of doctors, nurses and other helpers, to do relief work in Poland because of the typhus epidemic there. There he stayed for seven months in terrible and sometimes freezing conditions, distributing food, collecting the sick and nursing them in their own 'hospital'. The poor people of Poland had to suffer not only typhus, but cholera and the so-called Spanish influenza, were also rampant in the country at the same time.

Edgar Ellis was based at Zawiericie, south of Warsaw in Silesia, which had a large Jewish population, where most personal goods, had either been destroyed or stolen by the armies passing over them between the years 1914-1920. Here he was involved in setting-up de-lousing stations, particularly on railway lines. Edgar came back to Ossett for Christmas 1920, having done his best for the Polish people.1

In 1929, after the death of John Henry Glover at the early age of 65, Glover and Ellis had lost its leader to an early death. The company staggered on for a few more years, under the directorship of Walter Ellis, Edgar Whitaker Ellis and Henry Glover, but found it difficult to compete in a dying industry and eventually folded. It is believed that Edgar Ellis was involved in Adult School work in his later life.